Joe Biden said at a press conference more than five weeks ago: “Under no circumstances will you see people being lifted from Afghanistan from the roof of the US Embassy.” The President of the United States said that the Taliban were “extremely It is impossible to “own the entire country.”

On Sunday, helicopters rescued people from the roof of the U.S. Embassy in Kabul, and the Taliban took a group photo at the Presidential Palace after the lightning offensive in Afghanistan.

The U.S. Commander-in-Chief’s extremely incorrect assessment exposed the deficiencies of the U.S. intelligence, policy, and decision-making institutions. Officials working in the region said these deficiencies would have far-reaching effects.

So far, the Biden administration has admitted that it has made erroneous judgments in only one area: the analysis of Afghanistan’s military weaknesses.

“The Afghan security forces… proved incapable of defending the country. This did happen faster than we expected,” U.S. Secretary of State Antony Blinken told Sunday when asked whether the president was misled by his own intelligence agency. ABC.

After the fall of Kabul on Sunday night, a senior intelligence officer defended the intelligence community. He told the Financial Times: “Strategicly speaking, it is always possible for the Taliban to take over quickly.” The person added that the problem has always been Do the Afghan government and army have the cohesion and willpower to fight back?

“As the Taliban advance, they end up encountering almost no resistance. We have always been aware that this is possible, and the tactical conditions on the ground can usually evolve rapidly.”

A U.S. defense official told the Financial Times that the Afghan government has been slow to recognize the nature and importance of the threat. “We tried to guide them in making plans,” the official said, adding that the government had failed to integrate troops in the right places.

The official said that at first, Afghan special operations forces trained by the United States and other Western forces successfully repelled Taliban attacks in three major capital cities. But the turning point came when the Islamic organization occupied the first capital of Nimruz Province on August 6. Kabul has no special forces to send there, and the morale of the regular army is low. No fight.

A U.S. defense official of the Afghan National Defense and Security Forces said: “Of course we look forward to ANDSF playing better and longer.”

US intelligence and military leaders have repeatedly warned Biden publicly and privately that the Taliban might take over the country.At the same time, Biden is seeking Trump-era negotiations with the Taliban to ensure peaceful sharing trade In Kabul.

However, a report from the US intelligence community this year emphasized that the Taliban are confident of a military victory and that the possibility of reaching any peace agreement is very small.

“The Taliban is likely to win on the battlefield. If the coalition forces withdraw support, the Afghan government will have difficulty containing the Taliban,” it said.

Five days after the report was published, Biden announced in April that he would withdraw US troops from Afghanistan on May 1.

More warnings followed. In late April, General Frank Mackenzie, the top US general in the region, said that as the Biden administration sought diplomatic channels with the insurgents, he “seriously doubted the reliability of the Taliban.”

In June, the outgoing U.S. commander in Afghanistan, Scott Miller, made a bleak assessment of the Taliban’s nationwide benefits after the U.S. withdrawal, and publicly warned of the risks of civil war. Biden himself admitted last month that the Islamists at the beginning of the year have been in the strongest military power since 2001. CIA Director Bill Burns told public radio NPR that when asked about the intelligence report that Kabul could fall within six months, the trend line was “definitely disturbing” for the U.S. withdrawal.

“Everyone saw this, except for the president, who publicly and confidently dismissed these threats a few weeks ago,” said Mitch McConnell, the top leader of the Republican Party in the Senate.

The Taliban also arranged a terrorist activity to coincide with the US official timetable for rapid withdrawal of troops. A surge in targeted assassinations and violence, including reports of the Holocaust, was accompanied by a nationwide rural movement separating provincial capitals from each other.

As the Taliban rampaged, some officials admitted that U.S. military and intelligence assessments had failed to keep up with the situation on the ground. An insider familiar with the discussion said that although intelligence assessments are regularly updated to address the threat to Kabul after the fall of Kabul, officials are still not pessimistic enough and are constrained by collective thinking.

Military officials also believed that the Taliban would fight in a linear fashion between towns and cities, and did not expect them to move to the capital before they fully occupied the rest of the country. 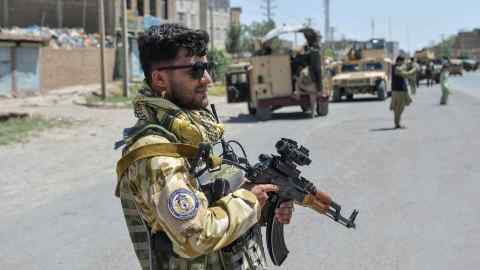 A former senior U.S. intelligence official said that Washington should know that the Afghan army will retreat easily, and that once they lose American air support in such a rapid retreat in Washington, they will not be able to fight, and the rapid victory of the Taliban is “foreseeable.” “.

The former senior official said: “Once the soldiers realize that there is no one to help reinforcements and close air support, they will retreat, flee or surrender.” “The whole withdrawal was too hasty and too optimistic… and in many ways. It’s messed up.”

Peter Ricketts, a former British national security adviser, said that the ability of the Taliban to fight the Afghan army has shown a “large-scale Western intelligence failure.”

“the fact is [Donald] Trump negotiates directly with the Taliban, shutting out the Afghan government [talks in] Doha has dealt a major blow to the morale of the Afghan government,” he said. “Then suddenly Biden announced that the United States would leave before September 11th. I think this puts the Afghan armed forces in trouble. Because if you think your government might collapse in the next few weeks, you won’t die for it. “

Some critics say that the real responsibility lies not with the Afghan army or the US’s miscalculations of them, but with the US president. They believe that Biden deliberately ignored intelligence assessments and prioritized political policy decisions that worked well with American voters.

“He did not choose a responsible approach, but instead chose to rely on political polls instead of data from his military leaders and the intelligence community on the local situation,” said Jim Inhoff, the top Republican on the Senate Armed Services Committee. “President Biden owns this mess-his hands are covered with blood,” he said.