Sign up for myFT Daily Digest and be the first to learn about German political news.

On Sunday night, the three candidates vying to succeed German Chancellor Angela Merkel (Angela Merkel) clashed during their first televised debate and diverged on how to deal with climate change.

Debate is accompanied by opinion polls September 26 election It is open, and no party can get more than a quarter of the vote. The center-right CDU/CSU and the center-left Social Democrats almost go hand in hand, followed by the opposition Green Party.

CDU/CDU leader and prime minister candidate Armin Laschet (Armin Laschet) is under tremendous pressure to improve the party’s performance. Some opinion polls indicate that it may be expelled after 16 years in power. Prime Minister’s Office.

SPD Prime Minister candidate and Finance Minister Olaf Scholz (Olaf Scholz) has the highest approval rating of the three, far ahead of the Green Party candidates Laschet and Annalena Baerbock ).

In the debate on private broadcasters RTL and n-tv-the first of the three before polling day-the three agreed more than they disagreed, and reached broad consensus on issues such as Afghanistan and the coronavirus pandemic.

But when it comes to climate change, they quarrel fiercely. This is a question raised by the Green Party itself.

Balbok said her party will hand over 2% of German territory to wind turbines, force all new houses to install solar panels on the roofs, phase out highly polluting lignite, and only allow emission-free cars to be sold from 2030.

Raschelt said the Green Party hopes to burden German companies with excessive rules and prohibitions. “You put the shackles of the industry and said:’Now, run faster’,” he said.

On the contrary, Laschet emphasizes the need to speed up the planning process and reduce red tape so that large energy projects can proceed faster. Scholz said Germany needs to set more ambitious goals to expand renewable energy and electricity networks.

Balbok, who was running for prime minister for the first time by the Green Party, retorted that other parties are hypocritical. “They don’t want to ban anything because it might not be great in the campaign,” she said. “To me, it sounds shocking to be honest.”

The three also have strong differences on taxation policies. Schultz called for higher income tax rates for high-income earners, while Raschelt, the Chancellor of Germany’s most populous state of North Rhine-Westphalia, ruled out tax increases. Possibility. He said that raising taxes while the economy resumes growth is “outright stupid.”

However, on most issues, the level of consensus is so high that it may be difficult for voters to discern any differences. The three agreed that Germany should take greater responsibility in the world, especially if the Taliban take over Afghanistan, and ensure that the Bundeswehr-the German army-and the police are adequately equipped.

They agreed that measures need to be taken to reduce child poverty and eliminate the economic differences that still exist between East and West Germany 30 years after reunification. 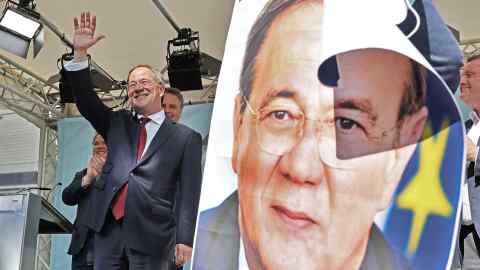 The most tense moment came when the three were asked about their views on the coalition that might emerge after the election, especially the prospects of the left-wing, “red-red-green” government composed of the Social Democratic Party, the Green Party, and Die Linke. The ultra-left party.

Raschelt confronted Schultz on this issue, challenging him to rule out an alliance with Die Linke, who opposed NATO and voted against the Bundeswehr’s recent deployment to rescue thousands of local workers from Afghanistan.

Scholz said he will not ally with any party that has not explicitly pledged to support NATO. “Are you serious, Mr. Scholz?” Lashet retorted. “I don’t understand why it is difficult for you to say that you will not ally with this party.

“Voters want to know whether you will make yourself the prime minister with Die Linke votes, and whether you will appoint Minister Linke to your cabinet, yes or no?” Scholz said this is a question of “clear principles.” “Obviously Those who do not abide by these principles have problems.” But he added: “It is the voters who decide who will become the next prime minister.”

Belbok said in his closing speech that Germany is faced with two choices-the “business as usual” of the Social Democratic Party and the CDU, and “a truly new state, a politics that really makes the future better.”

Schultz stated that he will ensure the “respect” of society through higher salaries, higher minimum wages and stable pensions, as well as greater emphasis on addressing climate change.

Raschelt said that as the wind of change blows, the Germans need “firmness, reliability and an internal compass.” “This is my proposal-and the CDU proposal,” he added. “Stability and reliability in difficult times.”